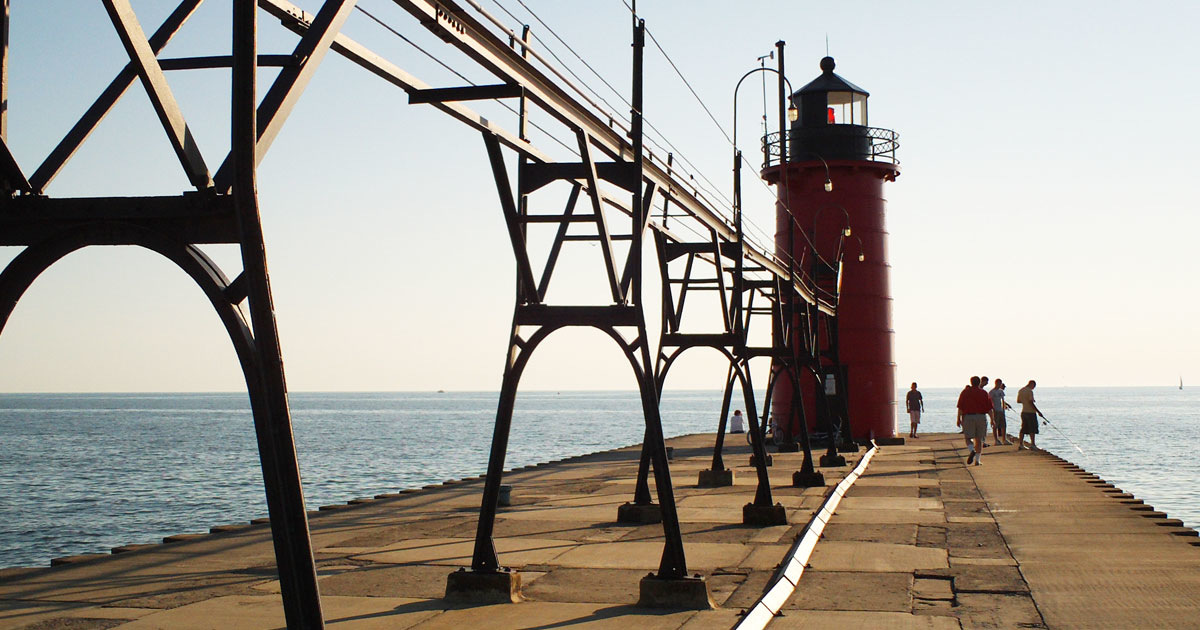 With hundreds of miles of coastline, West Michigan is dotted with lighthouses that for over a century have been guiding those navigating the Great Lakes. Take a peek of some of our favorite lighthouses in the area, and check out the Lake Michigan Lighthouse Map & Circle Tour for even more lighthouse information!

Established in 1839, two lights on the south pier in Grand Haven are connected by a lighted catwalk that also links them to the shore and the Grand Haven Boardwalk. People often enjoy a stroll along the boardwalk that borders the Grand River channel and the pier, making the Grand Haven lighthouses among the most photographed lighthouses in the Midwest. The Grand Haven pier is also a popular spot for fishing and catching the sunset.

Holland's beloved and popular Big Red Lighthouse, which stands proudly at the south side of the Holland Channel, has a long and rich history dating back to the first structure built on that site in 1872. For the best view of Big Red, visit Holland State Park, where you can walk along the boardwalk to the north pier. (It's wheelchair accessible.) You can also view Big Red from Mt. Pisgah, where the dune staircase takes you 157 feet above sea level for spectacular views.

The Ludington North Breakwater Lighthouse house is located three-quarters of a mile out into Lake Michigan on the North Breakwater pier, located at the end of Main Street in Ludington. At the top, guests are treated to a spectacular view of Ludington's million-dollar harbor along with the surrounding boat traffic out on Lake Michigan.

The black and white tower of Big Sable Point Lighthouse stands 112 feet tall out on Big Sable Point. It's just a two-mile walk along a breathtaking trail. Built in 1867, this almost 150-year-old structure still stands, providing a beacon to sailors who have to navigate around the point. Guests will climb the 130 steps to the watchtower room, walk out on the catwalk and witness spectacular views of the Ludington State Park, Lake Michigan and the Nordhouse Dune preserve.

The tower of the Little Sable Point Lighthouse appears out of place, almost surreal. The light sits by itself on the beach in the Silver Lake State Park. Guests can climb the 139 stairs to the top of the lighthouse. Little Sable has an ADA-compliant walkway from the parking area through the dunes, for easy access to the light.

Late in the 20th century, both the North and South Saugatuck Harbor Pierhead lights were replaced by white D9 cylindrical towers outfitted with modern acrylic optics. The North Pierhead light displays a horizontal black band across its middle section, and the South Pierhead light shows a similar band of red. Over the years, the shifting dunes have completely removed all traces of the village of Singapore, and boaters entering the harbor today are blissfully unaware that the luxury yacht manufacturer on the north side of the channel sits atop this once thriving lumbering community. Saugatuck is homeport to a large fleet of private yachts, powerboats and charter fishing boats.

For over 100 years, the South Haven Pierhead Light has guarded the entrance of the Black River. The tower is a shortened version of the Muskegon South Pierhead Light and replaced an 1872 wooden tower. The station was lit in 1872, and is still operational. The catwalk is original, and still links the tower to shore; it is one of only four that survive in the State of Michigan. Thousands of South Haven lighthouse fan photos have circled the globe!

The White River Light Station was built in 1875, and the beautiful brick building in Whitehall still reverberates with the stories of the keepers and their families. The lighthouse was decommissioned in 1960 and opened its doors as a museum in 1970. After exploring the museum, guests will continue up the stairs to the lantern room, which overlooks the White Lake Channel connecting White Lake to Lake Michigan.