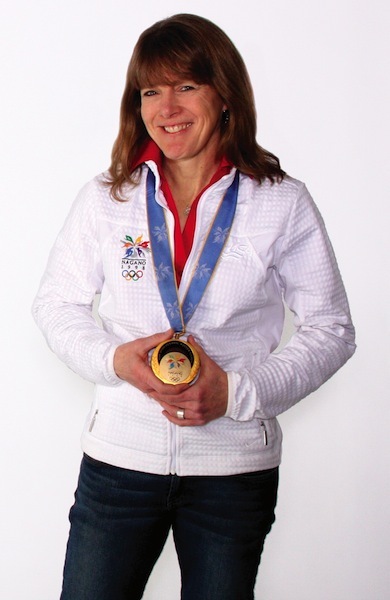 Lisa Brown-Miller constantly breaks the mold. The first time she played hockey at a local rink, she was the only girl on the ice. And in 1998, she was a member of the first U.S.A. women’s Olympic hockey team—not to mention a key player in clinching the gold medal. Lisa is a powerhouse career woman and always working to be the best mom she can be. From Nagano, Japan, to Holland, Michigan, she’s got her eye on the prize.

Lisa grew up in West Bloomfield, Michigan, where a small backyard made her childhood adventurous. In summertime, she fished, swam, and sailed the days away. And when winter hit, she was out the door with skates on, every day. “I started skating at the age of three; then in kindergarten, I came home and told my dad, ‘My buddy Chris plays hockey, and I’d like to give it a try.’” Lisa’s dad was hesitant to put his little girl in bulky pads and send her off to roughhouse with the boys, but Lisa was hooked.

When they couldn’t play outside, Lisa and her friends were in the basement refining their skills. Chris’ mother even let them play hockey in her living room, with tennis balls ricocheting off of the windows and TV. “I played all the time: in the basement, the driveway, and if there was ice on the lake, that’s where you could find me,” Lisa said. “You talk about having a passion for something. That was the epitome of passion.”

Click here to read more about Lisa and her journey to the Olympics!