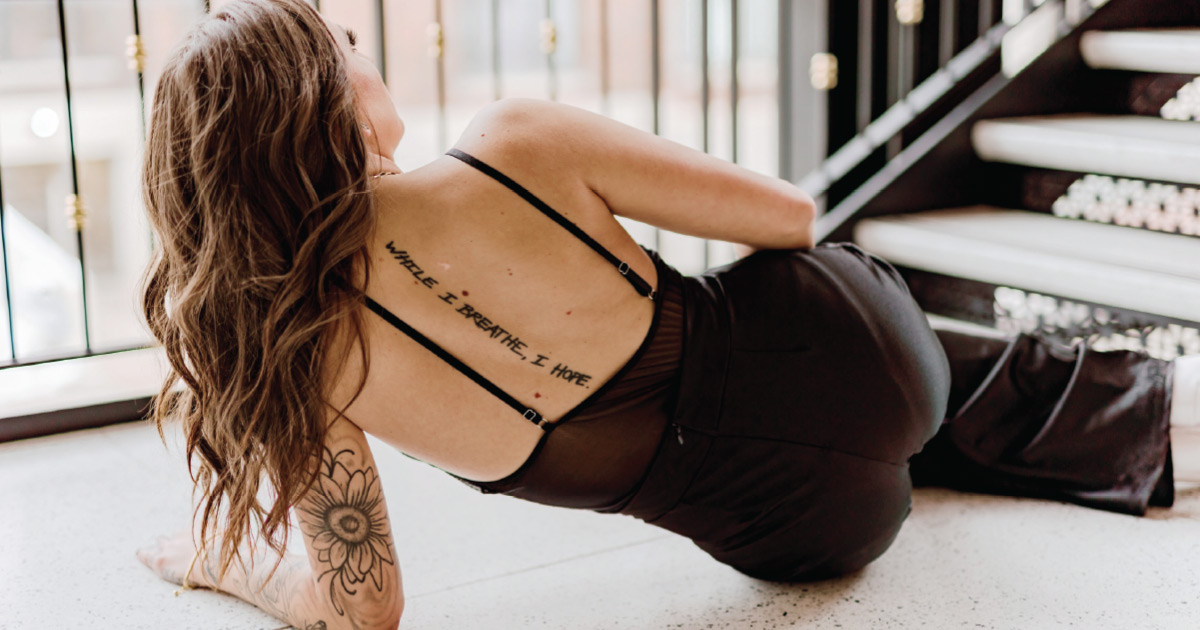 This April, Sophia Cerniglia is celebrating her 31st birthday. And while a birthday for most people is always a special occasion, it's especially precious and momentous for Cerniglia—someone who wasn't expected to live past age 18.

When you meet the vibrant and always-smiling Fruitport native adorned in blackwork tattoos, you wouldn't know she's one of over 30,000 adults and children in the U.S. who live with cystic fibrosis (CF), a progressive, genetic disease that causes long-lasting lung infections and limits the ability to breathe over time.

Cerniglia, a member of a close-knit family of five, was diagnosed at age six. Though she knew early on that she was different, she didn't let those struggles hinder her.

"I remember going to lots of doctor's appointments and having to miss out on some things," she recalled. "If my siblings were going out to play, I knew I had to wait and do my breathing treatments first. At the time, I didn't feel like it was too big a deal. I played sports, so I pretty much felt like a normal kid."

However, it wasn't until her condition worsened and she was hospitalized for the first time as a junior in high school that Cerniglia decided to share her CF diagnosis—once a closely held secret—in front of the entire school.

"It was the best and worst experience of my whole life, but it definitely shaped who I am today," she said of the two-week hospital stay. "I realized during that time this was me—it's not going anywhere. Embrace it. Love yourself, no matter what. If others see you differently, that's their problem, not yours.

"Before that in school, I was just 'the girl with the disease.' There were always rumors and misunderstanding."

When Cerniglia finally shared her story, the response was overwhelming.

"Everyone clapped and started sobbing. It was the best feeling, sharing that part of myself ... I felt so free."

Now comfortable sharing her CF diagnosis publicly, the experience catapulted Cerniglia head-first into getting involved in the community, working with schools and churches, in addition to serving on several committees within various CF foundations over the last 14 years.

Cerniglia continues to channel her experiences—good and bad—to help ease the burden for others living with the same disease. Through the creation of her own 501(c)(3) nonprofit foundation, Breathing Becomes Effortless (BBE), Cerniglia aims to help further the lives of adults living with CF by raising funds to pay for items like groceries, medications, gas, treatments, rent and more.

"I'm passionate about helping adults living with CF because it's never been an adult disease," she explained. "I've been on the other side of it and have been helped when it was needed. Hopefully those we help feel like they can breathe a little easier knowing some of these costs have been taken care of.

"I can attribute so much of what I've learned to two very special women: Michelle Ripley, president and co-founder of Friends & Families of Cystic Fibrosis, and Christine Panyard, a paralegal with Smith Haughey Rice & Roegge with over 30 years of experience in the health insurance industry. They have selflessly dedicated years of their lives for those who suffer with this disease."

CF has a mind of its own and you never know when it will disrupt your plans or rob you of independence.

"I've thought about death a lot. Not negatively, just in a realistic way," Cerniglia said. "Sometimes you go to bed thinking, 'Is this the night when I don't wake up tomorrow?' But it's made me who I am, living a life literally to the fullest. People say things like that all the time, but it's true. All the quality time and little things mean so much."

Despite being confronted with her own mortality on a daily basis, battling with depression and anxiety, and experiencing the devastating losses of her oldest sister, a pregnancy and several friends to CF, Cerniglia has made it her mission to forge bravely ahead. A relatively new medication, Trikafta, has offered Cerniglia and 90% of those living with CF even more hope and a renewed outlook on what's possible.

"I've been on it for two years now and It's been life-changing for myself and a lot of people. Recently, I sat down and cried at the realization that this is the first time in my life where I could get a full-time job, feel confident in my health, and spread my wings to do things like get married and have a family. I basically have a whole new life."

However, Cerniglia is quick to offer a reminder:

"There currently is no cure for CF, and we need to keep fighting so one day CF can stand for 'cure found.'"

Cerniglia's goals for the future are aplenty: Organize a BBE fashion show and a 5k race in downtown Grand Rapids, establish a CF scholarship in her name, take her public speaking on the road, finish the book she's currently writing and more. Through it all, Cerniglia's often found outside soaking up nature, advocating for mental health, connecting with others, playing sports and trying new things—a credit to her spontaneous nature.

Cerniglia hopes she can inspire others to find strength in the face of seemingly insurmountable challenges, and to approach life with understanding and empathy for others.

"Don't judge a book by its cover, because you have no idea what someone else is going through," Cerniglia said, recalling a specific example. "Plenty of my CF friends who needed handicap parking stickers have had people write long, cruel notes and leave them on their car because those people assumed they shouldn't be parking there. Because CF is pretty much an 'invisible' disease, much like depression and anxiety, we need better understanding."

While some women in their 30s may dislike seeing signs of aging emerge, Cerniglia adopts a different perspective as she enters her 31st year of life.

"It's such a privilege to get older and to actually see yourself getting older," she said. "I look in the mirror and see some wrinkles ... That's truly a gift I didn't know I was ever going to have."

Visit bbefoundation.com to learn more about Breathing Becomes Effortless and opportunities for volunteering, donating and information on their annual golf outing fundraiser on June 25, 2022.