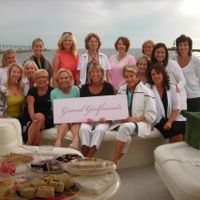 Donna Betten was like so many chemotherapy patients making frequent trips to Saint Mary's Healthcare in Grand Rapids for her treatments. But a simple box of makeup changed her outlook on her illness and on life thanks to an organization that is providing funding and care for women across West Michigan.

Grand Girlfriends is a fundraising arm of Saint Mary's Healthcare, and it makes supporting women's welfare its priority. Michelle Rabideau, the executive director of the Saint Mary’s Foundation, developed the concept of Grand Girlfriends because she saw a need for a society in West Michigan that involved women of all walks of life that allowed them to give charitably based on an individually determined payment schedule. Each member is required to make a one-time donation of $1,000, hence the name "Grand" Girlfriends, but the woman decides if she can make the gift in one, two, or twelve payments.

In its first year, Michelle hoped to gain twenty-five members, but as awareness of the group increased, so did its numbers, and by the end of that year, there were fifty Grand Girlfriends. Now, the club has 270 members and continues to grow by nearly thirty each year.

While undergoing treatment, Donna and other cancer patients were given a box of makeup and instructed how to apply fake eye lashes after their hair had fallen out. At the time, Donna didn't know who had provided the service and the makeup. She did know that she felt like herself again.

"It was just one of those things that made you realize, I'm not dying of cancer, I'm living this cancer, and I'm ok, I can do this," she said.

Funding for the makeup was one of the many donations Grand Girlfriends of Saint Mary's Healthcare has made to patients in the hospital's many departments. Now, Donna is a member of the group, and she maintains her positive outlook on life because of the friends she has made and the good she feels in giving back to her community.

Grand Girlfriends maintains an endowment fund created by its initial twenty-five members. The interest made on the fund is donated in many forms by the organization. Members vote each year on how to use their funds within Saint Mary's Healthcare. Recent donations have included plush bath robes for radiation patients, cards with assistance information for women of domestic abuse in the emergency department, engraved baby spoons for mothers in the birth department, and of course, the makeup boxes.

Member Heather Toppen was instantly drawn to the concept of Grand Girlfriends because she likes the idea of being part of something bigger than herself that will continue to grow. The voting aspect of the organization was also attractive to her, and she knows that her donation is being put to good use.

"Not only do I get to donate my money, but I get to decide where the money goes. I think that's really cool," said Heather. "I do recall there was not one proposal that I read that did not touch me and say, 'that wouldn't be a worthy cause.' The options are all very quality options," she said.

As membership increases, so does the number of gifts Grand Girlfriends can give each year. In 2011, the group made four donations.

"This is fantastic because you can give a one-time gift that goes on and on and on," said member Susie Krupp. "I love the idea of pooling money together and using portions of that money to support programs."

The common thread that weaves Grand Girlfriends together is their love of the community in which they live and their desire to improve its overall health care.

"The more people get involved, the further our reach will be. It's really a good feeling to give back," Michelle said.