Reconnecting with Your Spouse in an Empty Nest

Reconnecting with Your Spouse in an Empty Nest 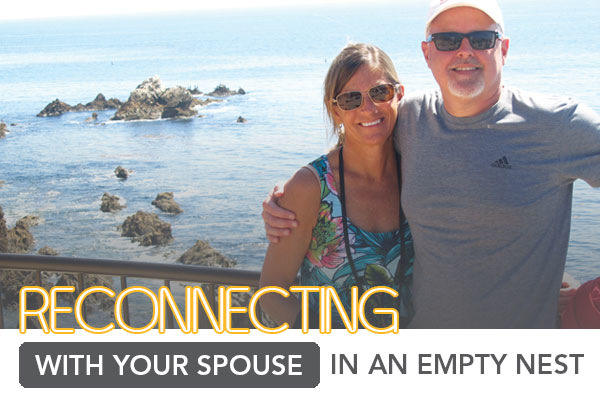 After spending a minimum of eighteen years shuffling your kids to and from play dates, music, dance, and athletic pursuits, your youngest (or only) child graduates and the intense hands-on phase of parenting abruptly comes to a halt. In the quiet that ensues, it's not uncommon for couples to feel a bit disconnected from one another. But having the kids out of the house presents an opportunity to get to know your spouse all over again.

"We talk more now, because it's just the two of us," said Julie Veltman, a Grand Rapids empty nester and mother of two "We don't talk about the logistics of how we're going to get the kids places, so it opens up more opportunity to talk about our opinions, thoughts, and feelings about life. As a result, we've had richer conversations and it's led to deepening of our relationship."

Drawing closer to your spouse is a wonderful benefit of having an empty nest. Here's how several local women reconnected with their partner, when their kids flew the coop.

Implement Date Night
Elaine Baker and her husband, Mitch, made a weekly date night priority after their youngest child, Patrick, graduated. "We tried to get to downtown Holland, window shop, maybe get ice cream," said Elaine. "But whether we went out to eat or ordered in, it was just our night."

Share a Hobby
When Janette and Stan Felder's youngest child, Dave, left the house, Janette decided to join Stan on his bike. "I'd never been on a motorcycle until I was forty-something years old," she said, "but I leaned in toward what he wanted to do." The couple has been riding together for more than ten years now, and is celebrating their upcoming fortieth anniversary with a two-week motorcycle trip. "Finding something to do together, preferably that you both can like, is so incredibly powerful in your marriage," Janette said.

Explore New Places
Susan Jones and her husband, Bill, share a love of travel. Their trips include stays in Rome, Morocco, and Costa Rica—some with their adult children, some just the two of them. But their initial foray into an empty nest involved more travel than usual. At around the time their youngest son, Scott, graduated and left for college, Bill took a job based in Pittsburgh. "It was kind of a baptism by fire for me," laughed Susan, "because Scott was gone and Bill was gone." On weekends, the couple took turns traveling between East Grand Rapids and Pittsburgh, where they enjoyed exploring museums and trying new restaurants.

Focus on Fitness
Both Julie and Warren Veltman like to golf, bike, play tennis, and work out. "We've both been better about working out in the fitness room at our house than we were when the kids were home," Julie said. They're looking forward to the end of this especially long West Michigan winter, so they can get outside and do more of the sporty activities they enjoy.

In the meantime, they've fit in outdoor fitness during vacations, like the one they took with empty-nester friends to sunny Naples, Florida. "We rented bikes and went on a twenty-five-mile bike ride," Julie said. "We rode north of Naples, through all kinds of little towns and beautiful neighborhoods. About halfway through, we stopped for lunch then got on our bikes and headed back."

Dial Up the Romance
Susan has found getting away to be key to boosting the romantic factor. "You're alone at home, but getting away to a nice hotel fosters romance," she explained. "It's something different, as opposed to the old routine."

The Felders have found that it's nice to not have to worry about little things, like always shutting your bedroom door. "There's a sense of adventure," said Janette, "and you can and should have some fun with that." She cautions soon-to-be empty nesters to resolve differences sooner rather than later, so they don't interfere with your relationship. "It's really hard to be romantic if you're angry with your husband."

Embrace Spontaneity
On a recent trip to Claremont, California, Julie and her husband took an afternoon to drive up the Pacific Coast Highway. "We drove along and found a restaurant at a marina, got there just as the sun was setting, and had a great crab dinner," she said. "It wasn't planned, but was so fun with just the two of us."

Watching your kids head out on their own is naturally bittersweet, and everyone handles the emotions a bit differently. "Just be flexible and feel what you're feeling," suggested Susan. "Then try to figure out what to do about it. It's nice to have time for different outlets and to be able to do things slower."

Julie agrees. Although she misses having her kids in the house, she's looking forward to the years ahead and focusing on her marriage. "The reality is that when you don't have as many distractions, it's nice to be with your spouse."

Written by: Kirsetin Morello is a contributing writer for West Michigan Woman.